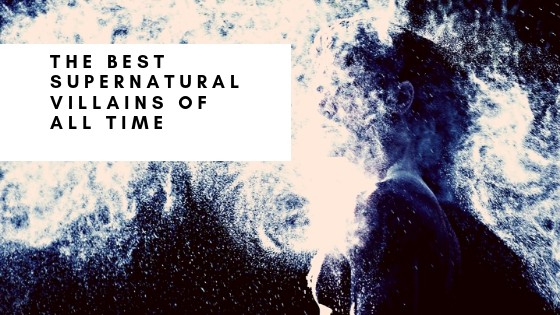 Yeah, yeah. Heroes are great and all.

But today, we’re talking about villains.

They say that villains often see themselves as the heroes of the stories, which is part of what makes them so fascinating.

Today, my fellow paranormal romance authors and I are discussing our absolute favorite villains and what makes us love to hate them (or just plain love them!).

Question: Who is your favorite supernatural villain of all time and why?

Without a doubt, Klaus Mikaelson is my favorite supernatural villain. He had a compelling backstory and he was fiercely protective over the people he cared about.

I don’t want to give anything away for anyone who hasn’t finished watching The Vampire Diaries and The Originals, but I’ll just say that he had an AMAZING character arc and I was crying like a baby during the entire last season of The Originals.

The only thing supernatural about her was that she was cursed to live forever, but I loved Delphine LaLaurie in American Horror Story Coven. She was a wretched, awful person who deserved everything she got in that show, but the writing was so good that I found myself feeling sorry for her at times.

As soon as I reminded myself who she was, I could wipe away any sympathy I felt for her, but she was a great villain.

Spike in Buffy the Vampire Slayer. He was so witty and sexy without being over-the-top evil and ended up teaming with her by the end of the season. He had feelings and motivations that made sense to me, and of course became a series regular so we got to see a lot more of him, but his villain run in season 2 with Drusilla was just a blast to watch. Those two had some insane chemistry!

Death from Supernatural is definitely my favorite. He’s just an entity trying to do the job handed to him, and he gets a bad rap as the head reaper, when he’s really just the guardian of the natural order. He just wants to find a decent deep dish pizza and to ferry the dead where they belong, but the Winchesters are incessantly messing him up. He’s singularly unimpressed with the antics of the world around him and sees it all as inconsequential in the Grand scheme of things. I’ll spare the spoilers for those who have never seen the show, but while he might not be truly a villain, he’s a dark neutral that I adored more with every word that left his mouth.

Submitted by Harper L. Jameson, Author of The Conduit

My ultimate supernatural villain is Loki. He’s so bad he’s good and I never can quite figure out if he actually has a heart of gold buried somewhere deep or will he ultimately screw Thor over.

My favourite super villain of all time would have to be Thanos from the Marvel Cinemas world. He destroyed half of the universe’s population with essentially just one hand. Like all villains, they believe they are the heroes of their story. Thanos believed he was making the universe a better place to live that didn’t include people not having to starve anymore because now there would be plenty of resources to go around.

But from the Marvel Comics world, he destroys half the universe to impress Death, who he has fallen in love with. So he is also a romantic at heart. Making him quite the complex fellow. Even villains need love.

Submitted by Jessica Gleave, Author of Helios and Zelena, Prequel in the Sky Realm series

Yikes! This might be harder than picking a favorite book boyfriend–I do so love me the baddies. I debated picking Loki (because, um, hello), but in the end, I have to go with the great and glorious villain who sparked my lifelong love of the bad guys: Maleficent. Everything about her, from her fierce head-horns (shared with Loki, possibly a theme?) to her raven to her brilliant, badass smile just sucked child-me right in. Here was someone fascinating. More than Prince Charmings or fairy godmothers, I imagined Maleficent’s backstory and I wondered what would have happened if she’d stayed a dragon and found herself a fire-breathing friend. And I love how the later live-action movie dug into that backstory and let Maleficent be the anti-hero I always knew her to be.

Submitted by Dee J Holmes, Author of An Inheritance of Curses