It's time to meet Sydney from Love & Omens! Well, I guess "meet" isn't really the appropriate word, since we technically met her in Love & Ghosts, book 1 of the Crescent City Ghost Tours Series. But now, she's in the spotlight, and seeing Blake again after all these years is a surprise she isn't ready to face. 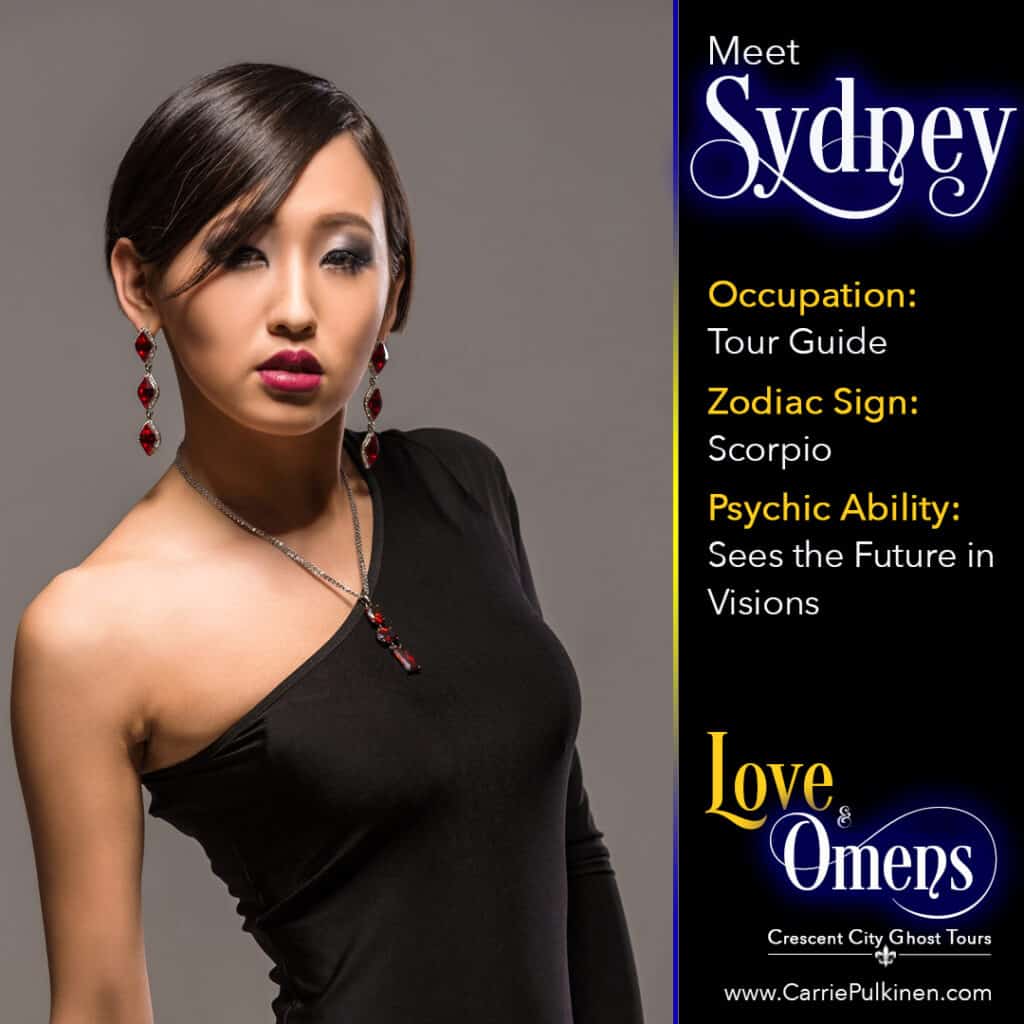 If you missed last week's post that introduced Blake, you can read it HERE.

Here's Sydney's reaction when Blake shows  up on her ghost tour:

Of all the times for Sydney to tune Sean out, it had to happen at lunch today. If she’d even been halfway listening to the conversation, she would have heard Blake’s name mentioned and been prepared…or at least aware she would have to face him tonight.

Nothing could have prepared her for those piercing blue eyes or the way his gaze bore into her, slicing her open and latching onto her heart. And now she had to work with the man…

She turned the corner onto Dauphine Street and led her group to the Sultan’s Palace. On autopilot, she told the story of the alleged massacre, the blood running out the door and onto the street, and the Sultan being buried alive. The presentation revealed the spirit evidence they’d captured on an investigation, and while she told the tour group the story of the Sultan was merely a legend, and the ghosts occupying the building had nothing to do with the horrifying tale, they always preferred the gruesome lore to the reality of the haunting.

Two tours a night, five nights a week, fifty-one weeks a year for the past six years. To say she was used to people watching her was an understatement. But something about the look in Blake’s eyes every time she accidentally caught his gaze made her throat close up and her palms sweat.

He kept his light brown hair sheared short on the sides and long on top in a messy wave. He had a strong jaw and sharp cheekbones, but those full, kissable lips softened his features, making him look like he stepped right off the page of a men’s cologne ad.

She delivered her speech at three more stops on the tour, and the patrons oohed and ahhed at the video evidence as usual. But Blake kept his eyes trained on her, barely glancing at his screen.

The heaviness of his gaze weighed on her conscience. How could he stand to look at her after she’d treated him so badly?

In her defense, he was going to treat her just as badly—she’d seen it in a vision. She’d simply ended the relationship before he got the chance to hurt her.

The real question was: how could he still stir butterflies in her stomach after all this time?

It didn’t matter. He’d planned to stand her up on what was—at the time—one of the most important nights of her life: her induction into the Krewe of Horae, for goodness’ sake. Only a select few were allowed to join the all-female Mardi Gras group each year. It was a huge deal, and any man who would treat a woman with that kind of disregard wasn’t worth wasting her time on.

Besides, eight years had passed since they broke up. He’d moved to New York and started a new life, and she’d moved on. They were adults now, not college kids. They could be professional.

As the tour concluded, she thanked the guests and accepted the tips they offered. Blake stood with Sean on the sidewalk a few feet away, and they shook hands, the excitement in their eyes indicating the deal had been sealed.

The flutter in her stomach rose up to meet her sinking heart as she swallowed the dryness from her mouth. Hopefully she wouldn’t have to work too closely with Blake. Sydney was in charge of tech, so as long as ghosts weren’t involved on Blake’s side of the company, he wouldn’t need her for much. No paranormal evidence to present meant no tech on the new tour. Hopefully.

She said goodbye to the last tourist and turned toward the men, squaring her shoulders and lifting her chin. If Blake didn’t mention their breakup, she wouldn’t either. There was no need to delve into the past when the present was the only time they could control. Keep it professional, Syd.

“That was an impressive tour.” His smile weakened her knees, so she locked them. “Sean says you designed the accompanying presentation from scratch.”

She sucked in the breath he stole from her lungs. “It makes the tour more interactive. The customers love it.” Her voice was steady, strong, masking the way her insides trembled.

“I bet.” He caught her gaze and held it, but he wasn’t looking at her. Something about his expression, his body language…his aura in general…made it seem like he was looking inside her.

It was part of his charisma, the way he always made her feel like she was the most important person in the room. Blake had a magnetic personality, but his charm wouldn’t work on her this time. They were coworkers now. Technically, if he and Sean were partners, that made Blake her boss. She knew better than to date the boss.

If she could convince her body to stop reacting like it was a sweet tooth and he was the last piece of candy on earth, she’d be okay.

Sean cleared his throat. “I want to schedule a lunch meeting with the whole team tomorrow to iron out the details. Then we need to plan a time to investigate the museum. The building itself has a residual haunting, but it will take some time to figure out if any new spirits have come in with the artifacts being collected.”

“And you two will need to spend some time together working out the new tour and the interactive displays for the museum,” Sean said. “Is that going to be an issue?” He arched a brow, his gaze flicking between them.

Sydney fought to keep her expression neutral. That was way more time than she cared to spend with Blake, but if she brought Eric or Jason along as a buffer, she could handle it. She forced a smile and tore her gaze away from Blake’s deep blue eyes. “Why would it be an issue?”

“I’m looking forward to it,” Blake said, his eyes still on her.

Is he, now? I’m sure as hell not. “Oh, but lunch tomorrow doesn’t work for me. My krewe is meeting to discuss our masquerade, so you’ll have to do it without me. Mardi Gras is a busy time of year.” She pressed her lips together, mentally smacking herself upside the head. Why did she have to bring that up?

She nodded, holding her breath. Please let it go. She did not want to revisit that near-disaster right now.

His lips twitched. “I remember when you first joined. You were so excited for your induction. It’s been what? Eight years now?”

Oh, lord. He went there. She clenched her teeth. “Something like that.”

“We’ll do it in the afternoon then.” Sean fished his buzzing phone from his pocket. “Three o’clock? I need you there, Syd. You’ll be taking over my duties for a while when the baby comes.”

She let out her breath in a slow hiss. There was no way out of this. “I’ll be there.”

He blinked. “Emily’s water broke.” His jaw went slack, his gaze darting from the phone to Sydney to Blake.

Sydney grinned. “You’re having a baby.”

“We’re having a baby.” He stood there, unmoving.

She laughed and gave him a shove. “Go get your wife and take her to the hospital.”

He nodded. “Thanks, Syd. Blake, I’ll be in touch.” He turned and jogged up the sidewalk.

“That’s exciting.” Blake caught her gaze again and shoved his hands in his pockets. “Sometimes I wonder what my life would be like now if I’d never gone to New York.”

That was her cue to leave. “It is what it is. You can’t change the past, so there’s no use dwelling on it.” And he didgo to New York. Even if he hadn’t planned on standing her up, he had planned to move across the country. Her heart would have been broken either way.

His gaze danced around her face, pausing on her lips a moment too long. “If I could see the future…if I’d known how it would turn out…”

“If ifs and buts were candy and nuts…”

“But you did.” She shrugged. Blake didn’t know about her ability. Everyone thought they wanted to see the future, but would he really have done things differently? Doubtful. Whatever reason he’d had for standing her up must have been more important than their relationship. Anyway, he wouldn’t have missed grad school for her. She wouldn’t have let him.

Pain happened, whether she could see it coming or not, and if she could give up her ability and never see the future again, she’d do it in a heartbeat. But ifs weren’t worth the breath they were uttered on.

She crossed her arms, doing her best to ignore the regret softening his eyes. “Where are we meeting tomorrow?”

“At the museum.” He hesitated. “What’s your number? I’ll text you the address.”

She recited the digits as he punched them into his phone. Hers buzzed in her pocket, and she pulled it out to glance at the screen. “Got it. I’ll let the guys know.” She took two steps backward, hoping to break the magnetic hold he had on her.

He didn’t move. “I’m looking forward to working with you.”

She forced a smile, nodded, and turned away. 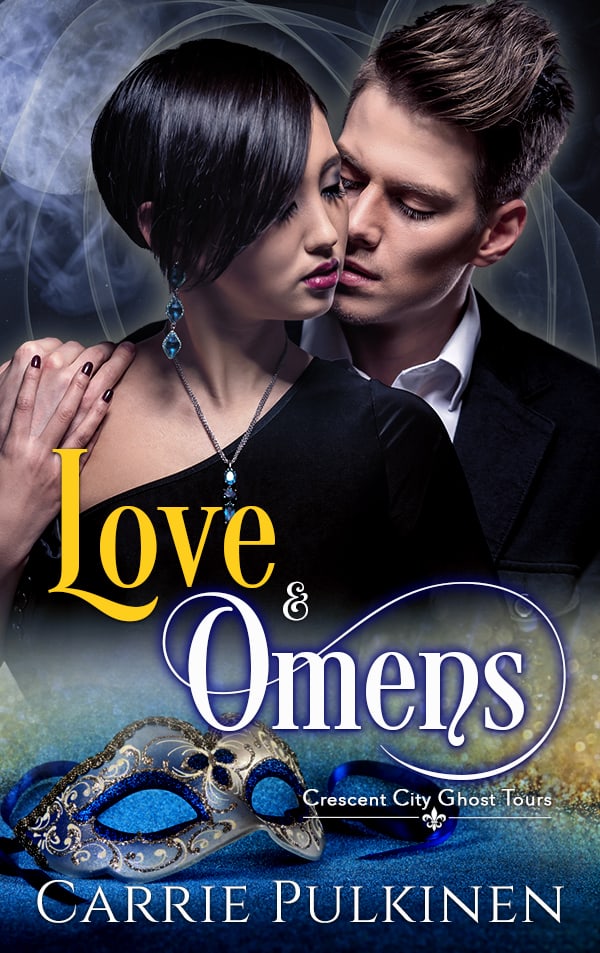 I hope you enjoyed getting to know Sydney a little better! Love & Omens releases November 11th, so you'll get to read her entire story soon!

Add it on Goodreads.

One thought on “Meet Sydney from Love & Omens”